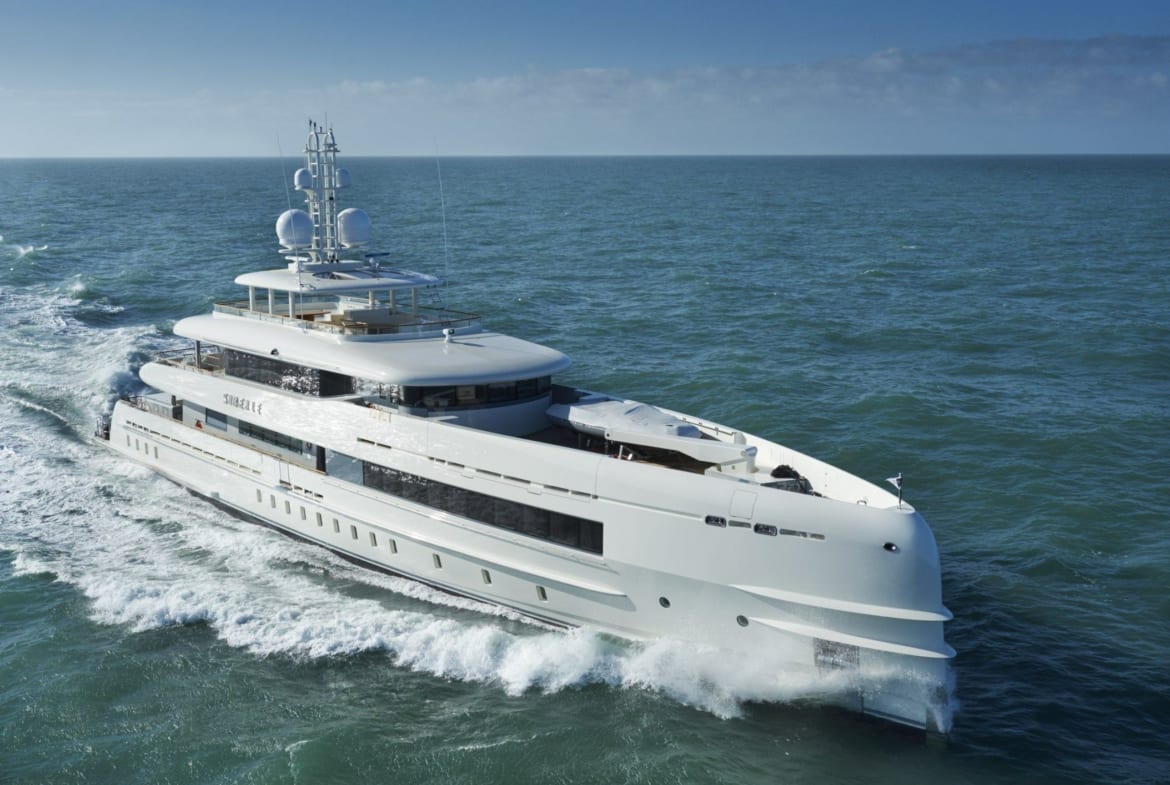 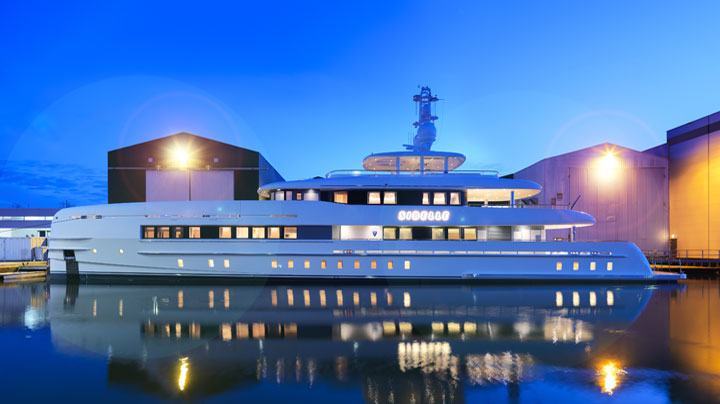 The ShowBoats Design Award for exterior design and styling on motor yachts below 500GT had nine finalists featured yachts from 32 meters to 50 meters and styles from raised pilothouse to expedition.

The runaway winner was the second longest yacht in the group – Sibelle – whose radical styling combined a slight reverse or destroyer bow with a hard chine and a knuckle to broaden the bow above the waterline and blunt it at the sheerline. The spray rails at the bow were envisioned as part of a strong, deliberate horizontal design vocabulary that includes dark bands of glass that although stepped, appear continuous and help make the yacht appear longer than her actual 49.9-meter length.

The bullnosed shape of the side and aft deck overhangs reinforces the powerful look of the exterior while mirroring the curves of the built-in aft deck seating areas. Symmetry is a strong secondary design theme and this is particularly noticeable on the mast and sun deck. The surprise of skylights in the sun deck hardtop, however, and the picture window opening onto the aft swim platform add a light touch and remind us that Sibelle is a yacht of delightful, engaging contrasts.

Sibelle has a fuel capacity of about half that of traditional displacement yachts. She carries 11,888 gallons (45,000 liters) and can still cross the Atlantic. At 13 knots (she’s equipped with twin 8V 4000 Series MTUs), Sibelle is expected to have a 3,150-nautical-mile range. Top speed under half load should be 18½ knots.

Of course, the owners wanted the interior of Sibelle to reflect their tastes, too. Bleached teak paneling, with the grains arranged horizontally, creates a casual environment. Each of the four guest staterooms, including two VIPs, have a particular lighting design to lend a distinctive atmosphere. The owners’ suite is in the typical location forward on the main deck, with separate his and her baths adjoining related dressing areas. The master suite occupies much of the 29’5” (9-meter) beam.

The 11-person-strong crew of Sibelle can transform the foredeck into a second beach club of sorts. The rescue tender and primary tender stowed here can be offloaded, and fold-down platforms are then at the owners’ and guests’ disposal. The primary beach club is in the customary location fully aft below decks. It includes a sauna and can be reached via a stairway in the saloon.

Omega Architects, which styles most of Heesen Yachts’ projects, collaborated on the interior with Moscow-based AB-Studio on styling and interior design for Sibelle.

The 164.04ft Custom expedition motor yacht ‘Sibelle’ was built by Heesen in Netherlands at their Oss shipyard , she was delivered to her owner in 2015. Omega Architects is responsible for her beautiful exterior and interior design.
Accommodation
Sibelle offers accommodation for up to 10 guests in 5 staterooms 1 owner cabin, 2 VIP cabins, 2 twin cabins,

Sibelle yacht is equipped with an ultra-modern stabilization system which reduces roll motion effect and results in a smoother more enjoyable cruising experience underway. This luxury yacht is also fitted with ‘at anchor stabilisers’ which work at anchor, increasing on-board comfort when the yacht is stationary, particularly in rough waters.

Performance
Powered by 2 MTU (8V 4000 M63) 746hp diesel engines and propelled by her twin screw propellers Motor yacht Sibelle is capable of a top speed of 19 knots, and comfortably cruises at 15.1 knots. She can carry around 45,000 of diesel on-board in her fuel tanks. Her water tanks store around 16,500 litres of fresh water. 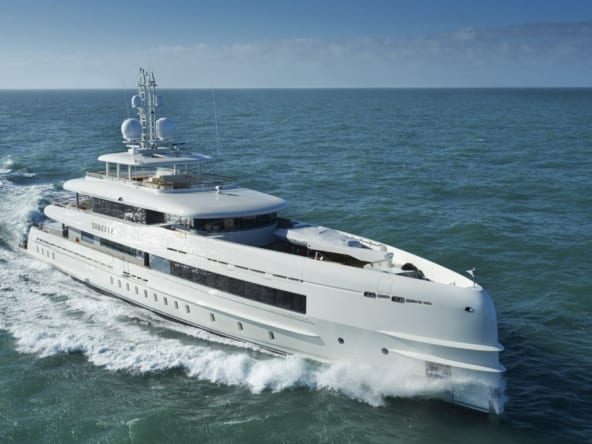 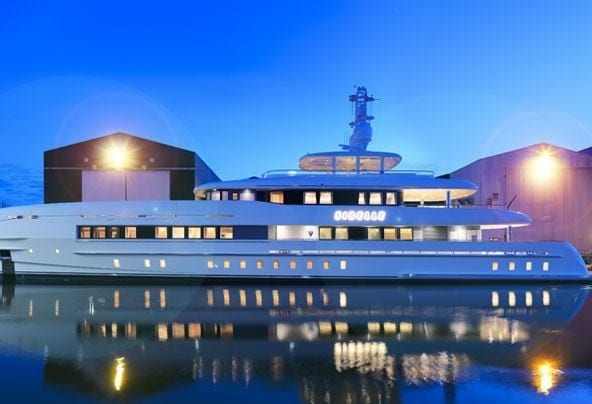 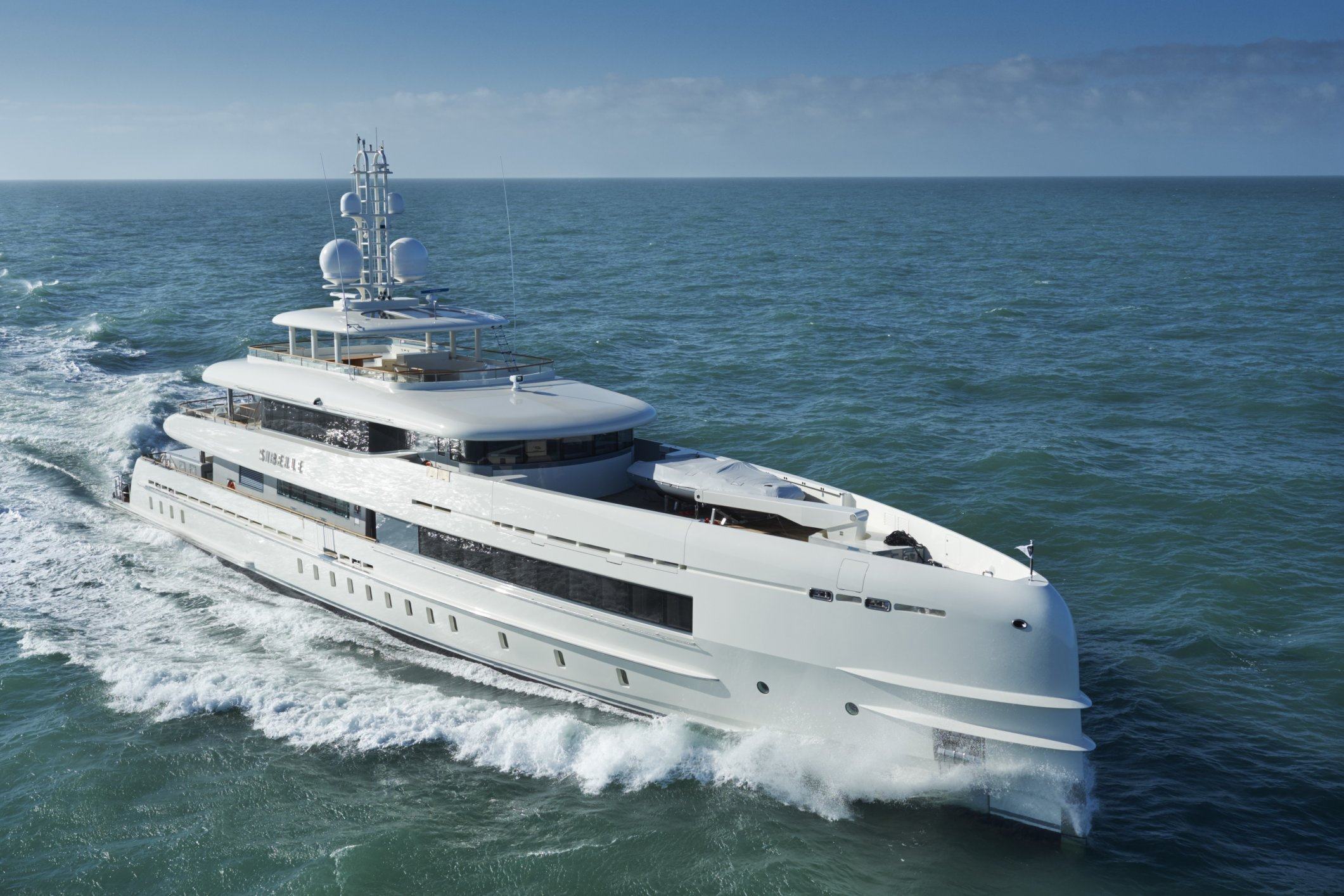