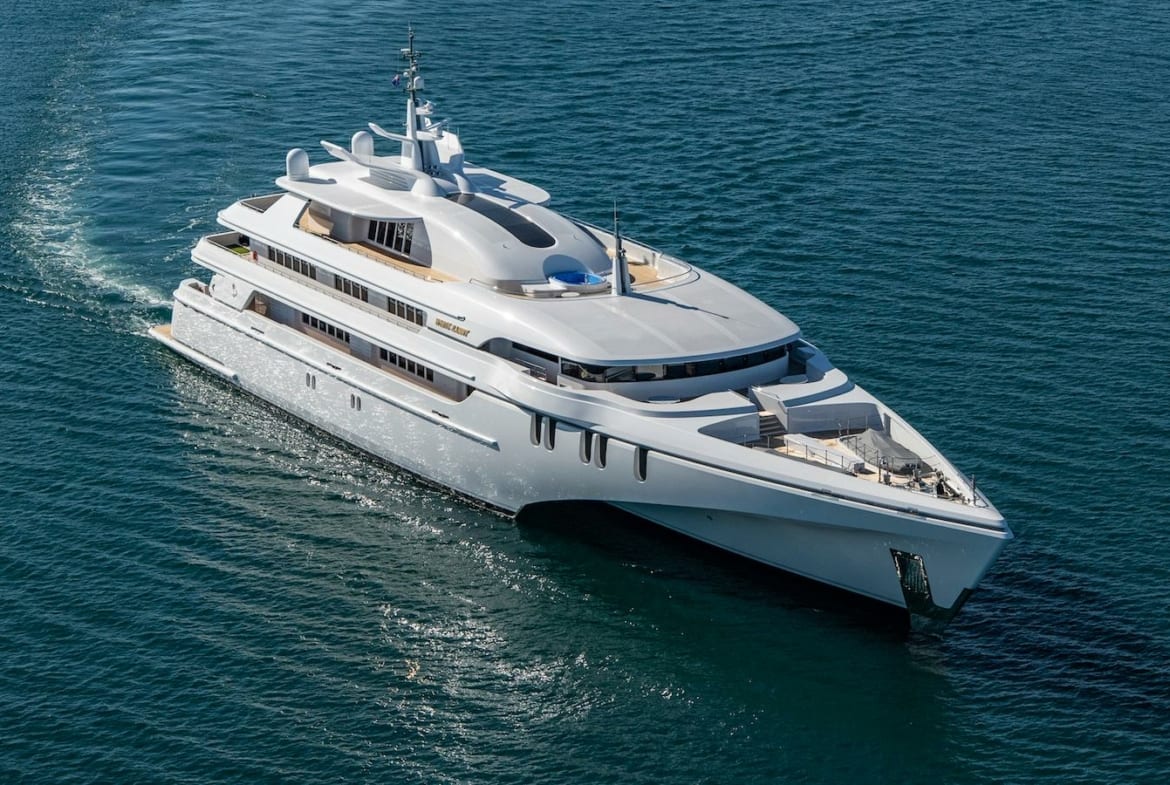 The yacht, which is now the largest trimaran superyacht in the world, was handed over to her owner on October 31 2018.

It comes after the yacht was launched on September 1. She then underwent extensive sea trials off the Western Australian coast.

The yacht was first unveiled at an event held at the Australian yard in August. The evening included VIP speeches, video documentary of the build and a sound and light show.

Originally intended for a 2017 delivery, the 84 metre trimaran was designed by Sam Sorgiovanni with One2Three developing the naval architecture. White Rabbit will offer huge interior volumes with the ability to accommodate up to 12 guests.

White Rabbit is the biggest superyacht ever built in the country and will be delivered to an experienced owner who owns a number of other multihull superyachts. These include a 51 metre shadow catamaran vessel, also built by the Henderson based yard, which will be used as a support craft for the 84 metre superyacht.

Built in fibreglass with cutting edge vacuum infusion processes and high-tech laminates, the catamaran, named Charley, was designed by LOMOcean in New Zealand to house a fleet of 11 watercraft including a 12 metre catamaran.

WR
White Rabbit was launched from BAE Systems’ Henderson based facility Image courtesy of Echo Yachts
Echo Yachts director Mark Stothard said he was “very proud” of White Rabbit, describing the yacht as a project “many other builders would shy away from.”

He added: “We are very grateful to our client for pushing us and backing us all the way in these endeavours. The net result is that the yacht we are about to hand over is truly world class and a credit to everyone involved.”

Trimaran
The trimaran is now the world’s largest tri-hulled superyacht.
Designer Sam Sorgiovanni added: “There is a great sense of pride that comes from seeing the launch of White Rabbit. It’s not just the time that it took to build the yacht but more so from history and the fact that my career started here and with many of the people involved in the project.”

Of nine fully documented entries, three yachts excelled: GO, Stella di Mare and White Rabbit. It is difficult to imagine a more diverse group. Our naval architecture subcommittee ranks entries on a complex matrix including 3D hull lines, computation of horsepower, speed and displacement, CFD or model test information, hull photos and videos of the vessel running. For an owner wanting lots of accommodation and deck space, speed without noise and vibration, spacious entertainment areas, maximum stability and safety, One2three Naval Architects seized on the trimaran form. While 90 per cent of the displacement is in the centre hull, the side hulls house generators that power quiet electric drive motors and add stability. But beam constraints imposed by the owner’s home port mean they are not as far outboard as would be optimal. The bold solution pairs trim tabs and four active lateral foils to control water ow between the centre hull and side hulls. These additions result in roll and pitch reductions of 60 per cent at 16 knots cruise speed tested in a three metre seaway and add significant passive damping at zero speed. The resulting vessel takes top marks for economical performance but innovation leading to a multi-pronged approach to maximum stability and seakeeping earns White Rabbit the prize. 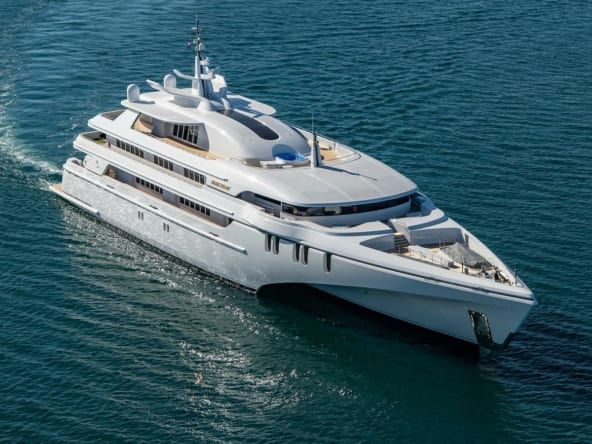 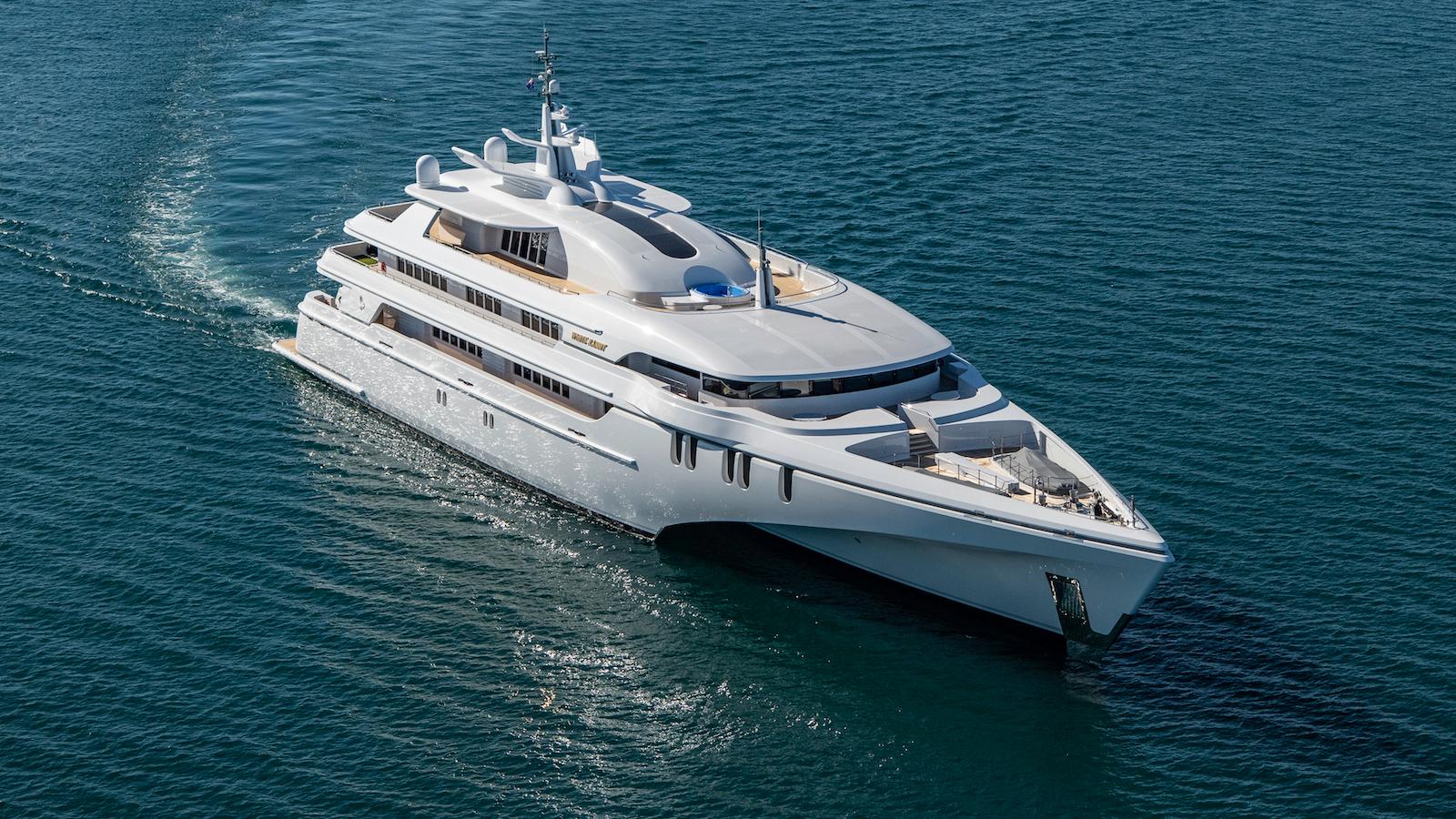