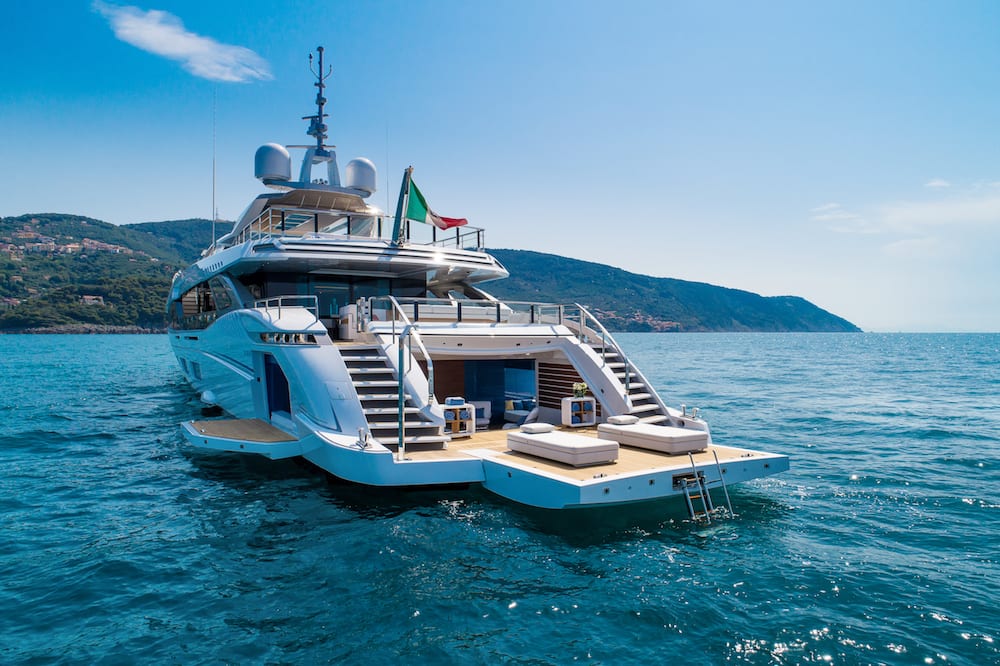 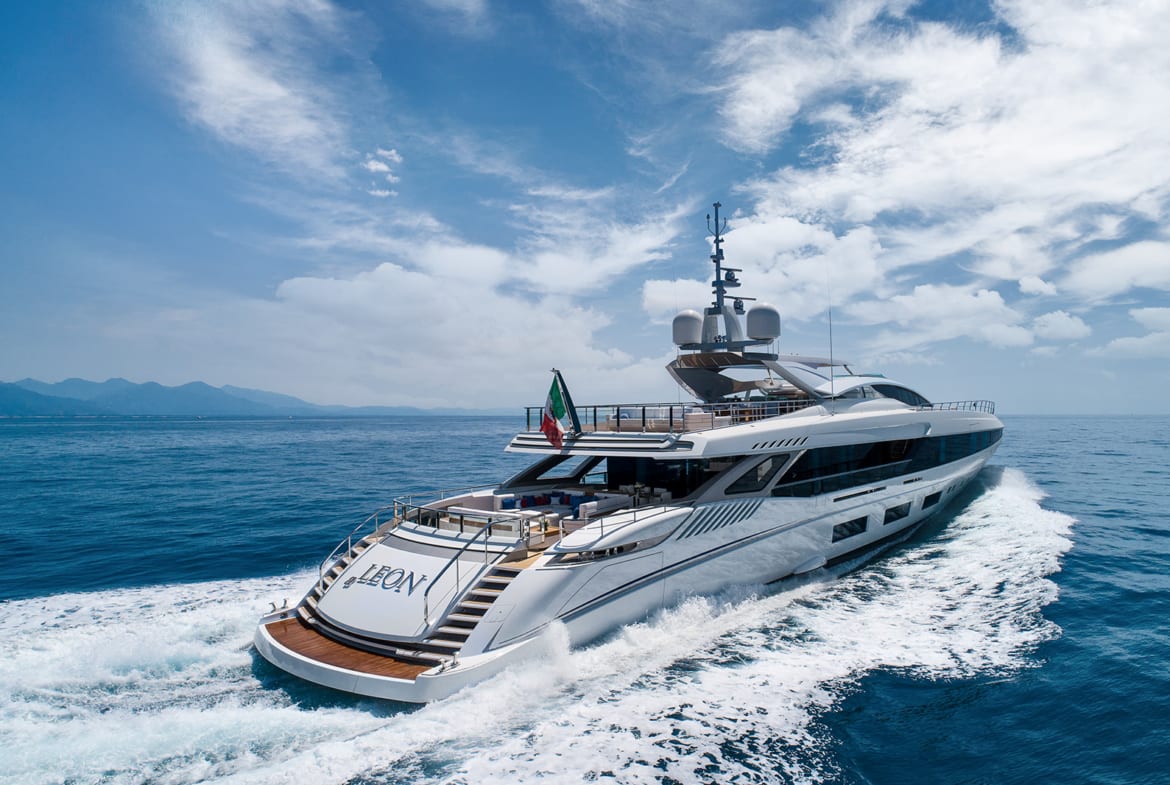 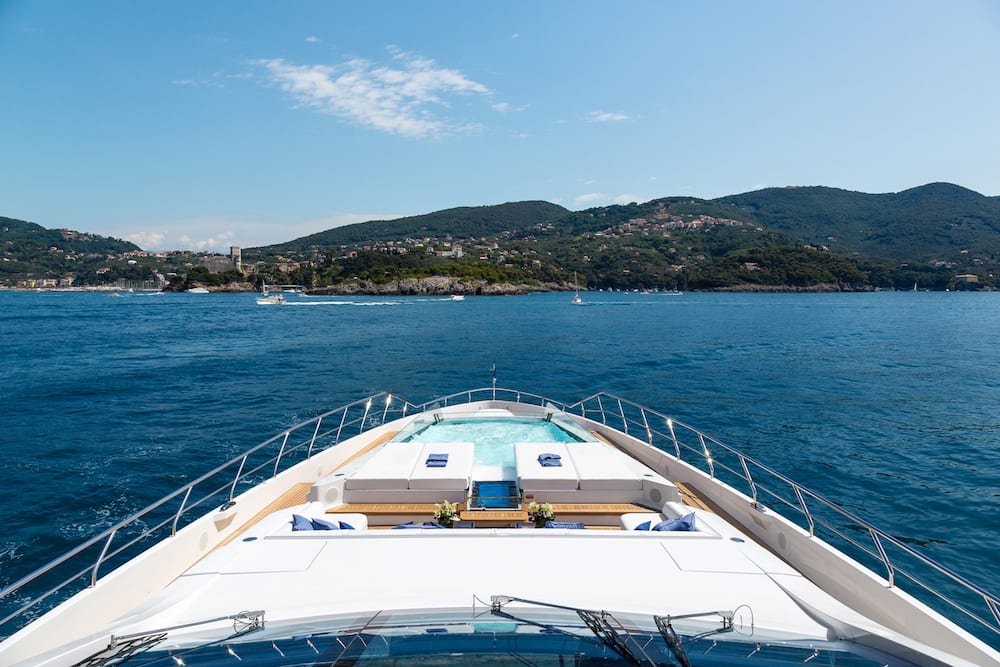 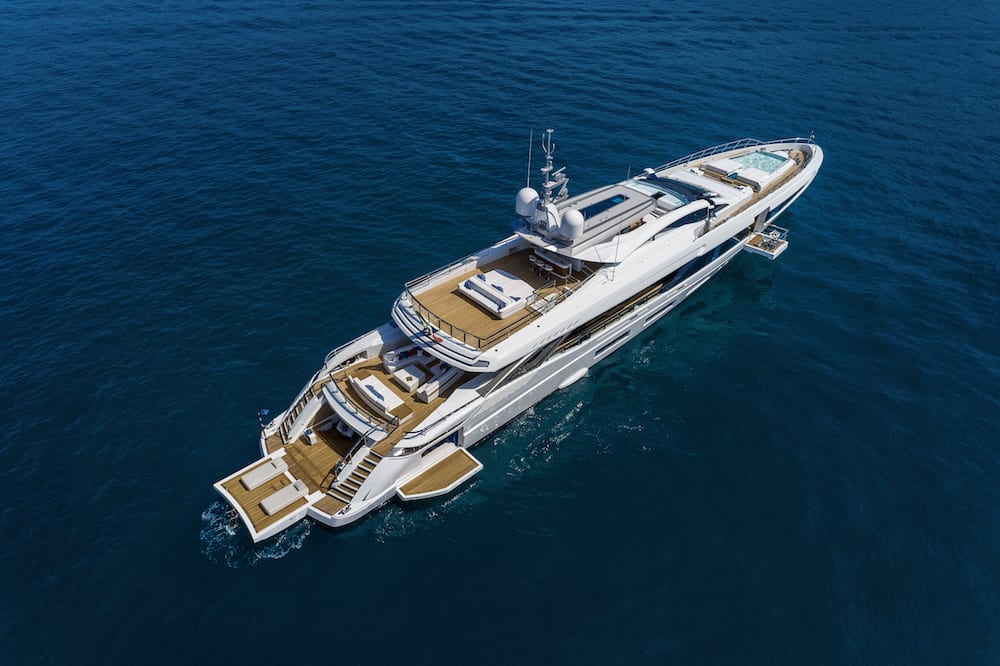 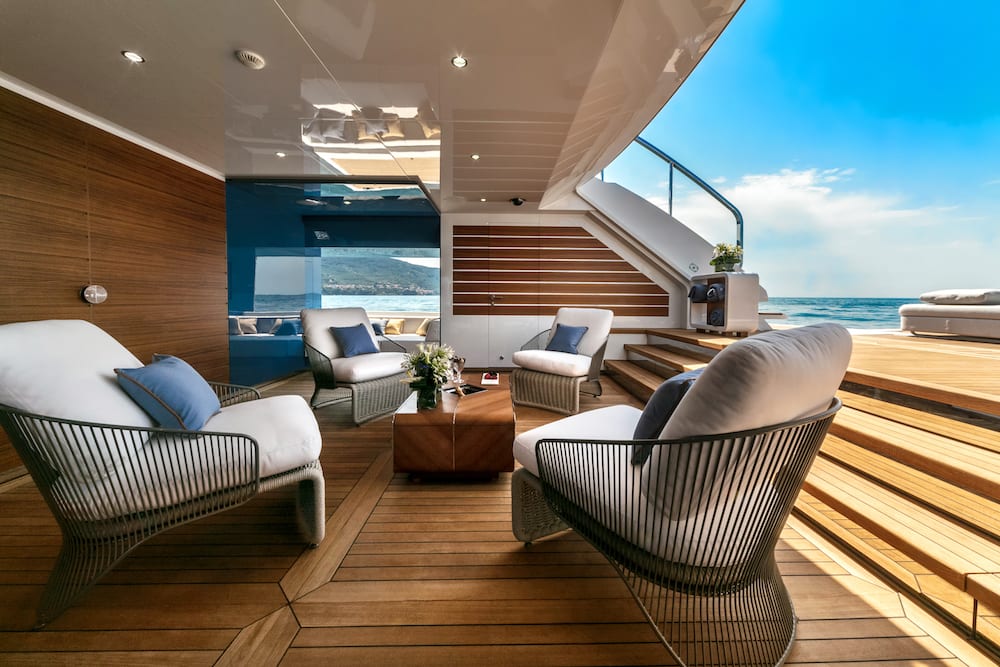 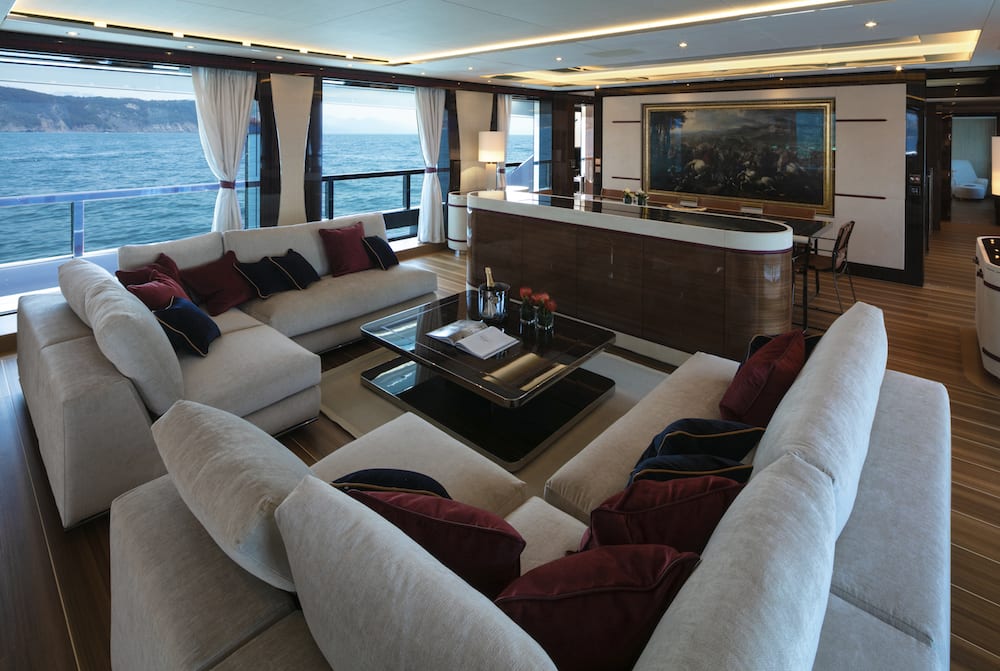 EL LEON is a 54-metre/177ft luxury motor yacht built by Mangusta (Overmarine) and launched in 2018. She features masculine and sporty profile with aerodynamic and sleek lines, designed by Alberto Mancini. The interior featured modern styling and was created by Overmarine Group Design Department in collaboration with Alberto Mancini. EL LEON provides accommodation for up to 12 guests in five luxurious cabins.

The sundeck of El LEON hosts the Jacuzzi and swimming pool, ideal for socialising and relaxing. The aft deck boasts “the club on the sea” with a terrace and beach club. The central bar located on the flybridge serves the alfresco dining area covered by the hard top and the living area located towards the stern.

Powered by four MTU 16V 2000 M96L engines, El LEON can reach a top speed of 30 knots. When cruising at 12 knots, she has a range of 4,200 nm. The yacht is equipped with zero speed and underway stabilisers.

Mangusta has delivered more than 100 megayachts measuring 98 feet (30 meters) and up. All but four of those have been maxis. The four, including El Leon, belong to the Mangusta GranSport series, initiated in 2015. Interestingly, the owner of El Leon is a repeat Mangusta maxi buyer. He became the first Mangusta GranSport 54 buyer in 2016 because he wanted to pursue some long-range trips.

The first of a new GranSport series for her builder, Overmarine, El Leon boldly combines the look of an open yacht with the liveability of a displacement motor yacht. The all-aluminium fast displacement style hull and four engines deliver the speed element of the Mangusta DNA, but how would this translate to a larger interior? It helped that the customer for hull No 1 has owned several Mangustas and had a good relationship with the yard when he and his designer sought to customise the layout and décor, adding a gym and a full of office and requesting American walnut and glossy ebony joinery. Features that distinguish this low, sleek boat such as floor-to-ceiling windows and a 2.6m saloon overhead height required clever solutions to hide the mechanisms of the luxury lifestyle such as air conditioning with fan coil units hidden in elegant freestanding furniture. Judges complimented the staircase surround that ties into the main deck lobby floor in a veneer waterfall effect and the innovative the use of a pliant new material borrowed from the automotive industry to light columns defining the entrance. It was developed for dashboards of luxury cars but Overmarine found a way to glue it into a semicircular plexiglass material. The result is simply stunning. 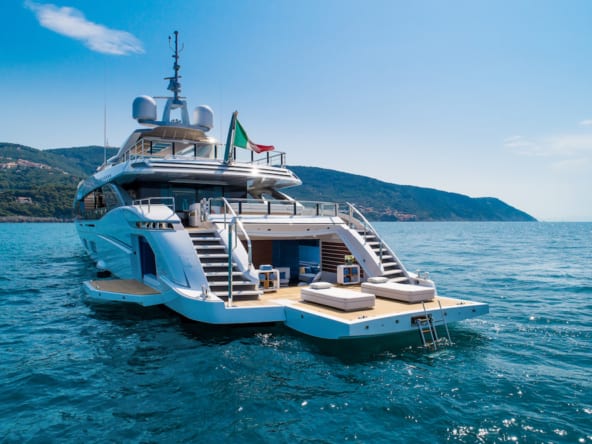 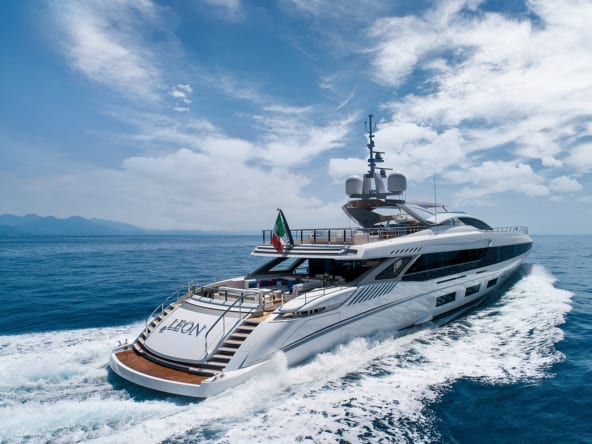 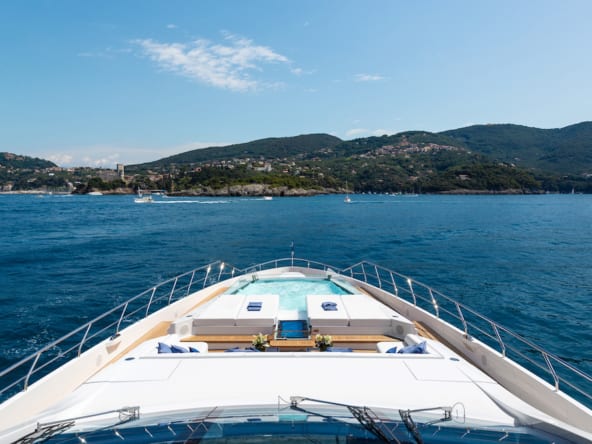 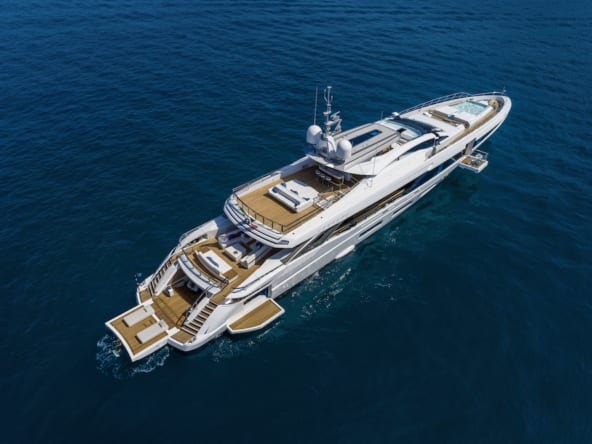 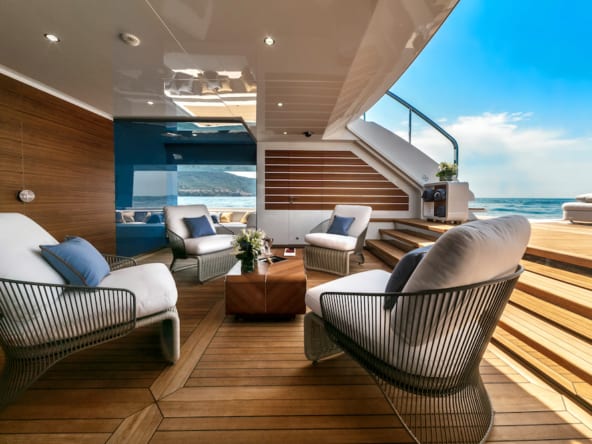 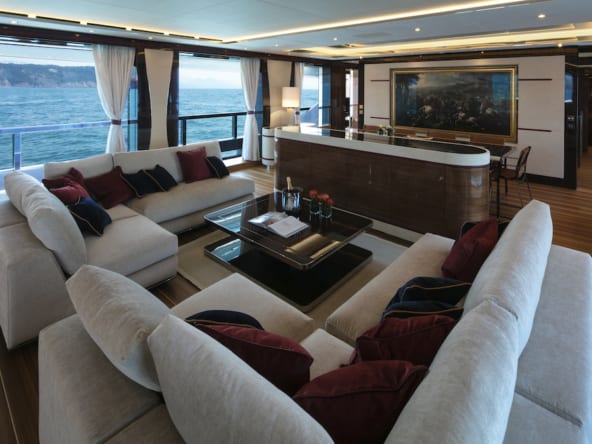 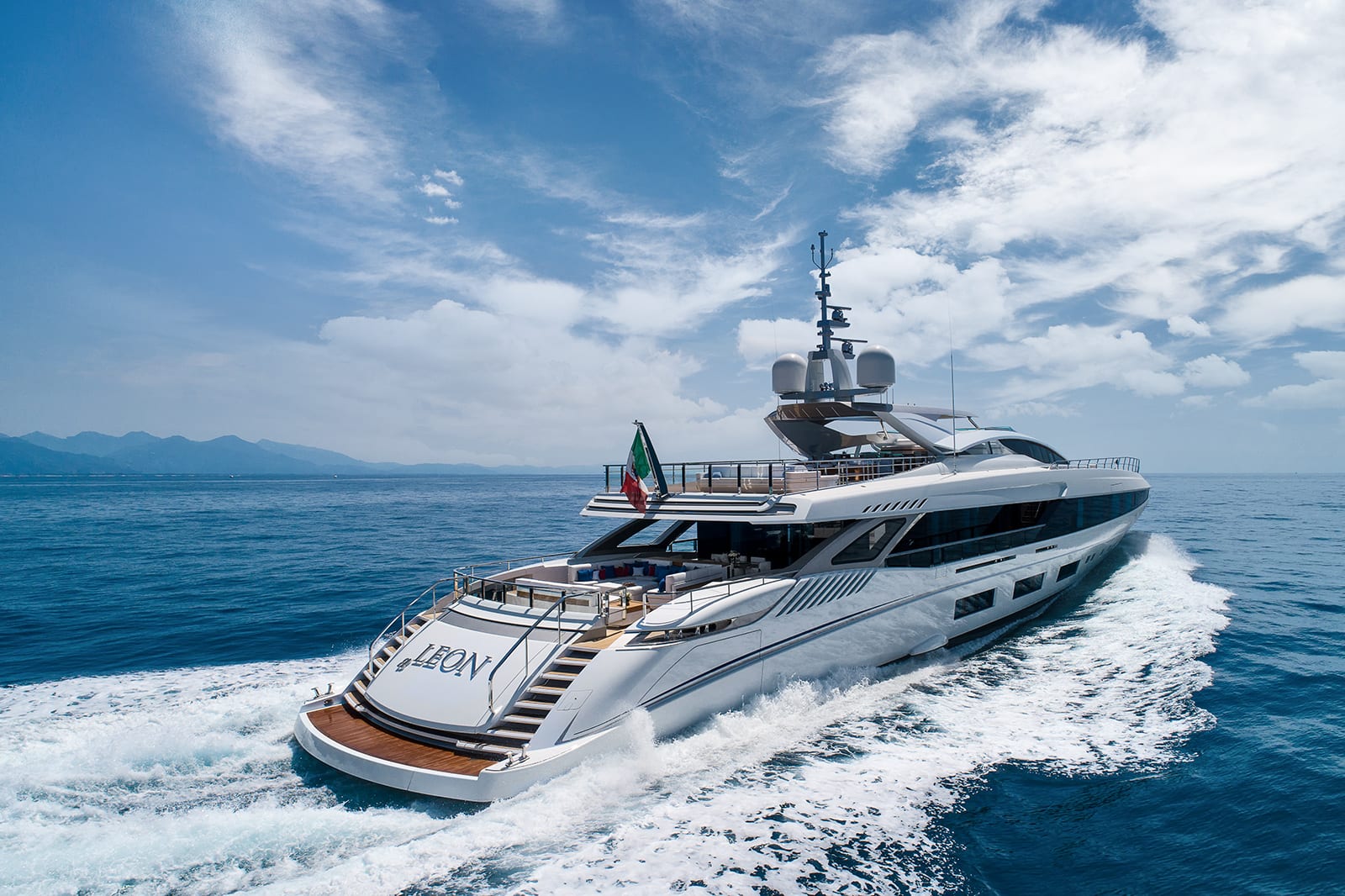