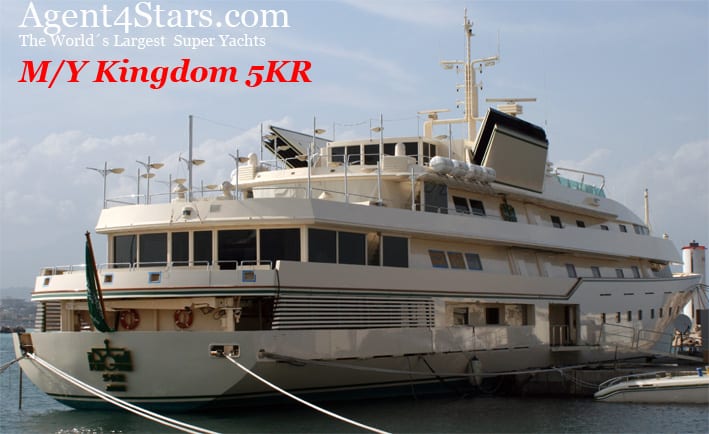 The yacht was built in 1980 by the yacht builder Benetti at a cost of $100 million (This is equivalent to $260,379,645 in 2009 and designed by Jon Bannenberg. Its original interior was designed by Luigi Sturchio.

It was originally built as Nabila for Saudi billionaire Adnan Khashoggi (named for his daughter). At the time of its construction it was one of the largest yachts in the world.

During its days as Nabila, it was featured in the James Bond movie Never Say Never Again, in which it was seen as Flying Saucer (translated from Italian Disco Volante in the source novel, Thunderball), the villain’s superyacht mobile HQ. It was also the inspiration for a track, “Khashoggi’s Ship”, on the 1989 album by rock band Queen, The Miracle.

After Khashoggi ran into financial problems, he sold the yacht in 1988 to the Sultan of Brunei, who in turn sold it to Donald Trump for $29 million. After a refit, Trump renamed it Trump Princess.

When Trump ran into financial problems, he sold it to Prince Al-Waleed bin Talal for $40 million in 1991 per the New York Times.

The yacht’s latest name stems from the Prince’s investment company, Kingdom Holding Company, his lucky number , and his children’s initials (‘K’ and ‘R’).

When it was delivered it had five decks, a disco, a cinema with seats for 12 and 2 double beds, 11 opulent suites, a helipad on top (its funnels are sloped outward to avoid interference with the helicopters), a pool with a water jet on top in front of the heliport, 2 Riva tenders, a crew of 48, a top speed of 20 knots, and cruising speed of 17.5 knots.

Kingdom 5KR is a 86m motor yacht, custom built in 1980 by Benetti. The yacht’s interior has been designed by LUIGI STURCHIO and has exterior styling by Jon Bannenberg. She was last refitted in 1993.

Kingdom 5KR yacht has a steel hull with a aluminium superstructure with a beam of 13.20m (43’3″ft) and a 4.70m (15’5″ft) draft .This custom yacht is equipped with an ultra-modern stabilization system which reduces roll motion effect and results in a smoother more enjoyable cruising experience.

Kingdom 5KR Accommodation
Kingdom 5KR offers accommodation for up to 22 guests in 11 suites . She is also capable of carrying up to 31 crew onboard to ensure a relaxed luxury yacht experience.

Kingdom 5KR is currently not available for Charter 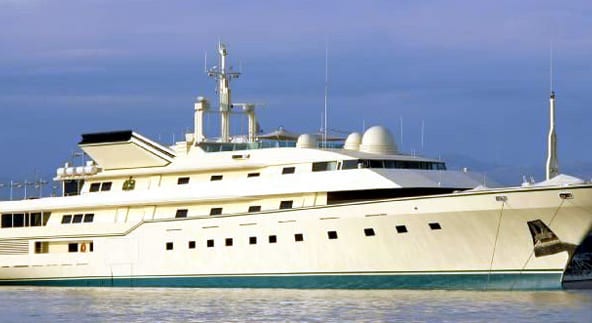 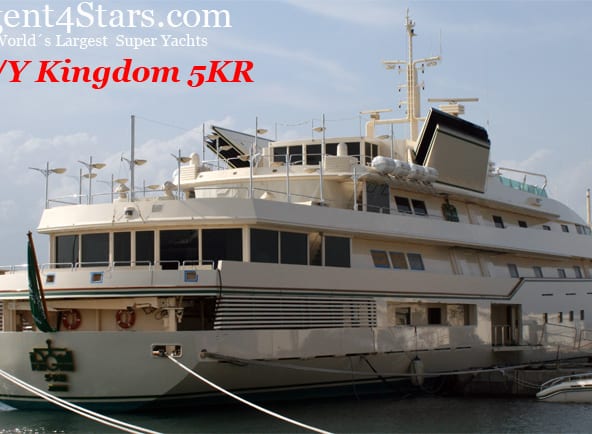