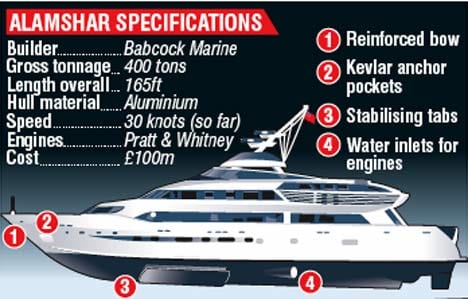 “This was supposed to reach 60 knots but it can go only half that speed, so the Aga Khan is taking legal advice. He’s not a happy man.”
Alamshar More carthorse than racehorse … the Aga Khan’s £100m yacht

With a £100million price tag, the Alamshar was intended to be a superstar among super-yachts, 165ft of exquisite luxury powered by engines capable of blasting it to more than 60 knots – and on to a new transatlantic speed record.

But the vessel’s billionaire owner, the Aga Khan, has reportedly been left hugely disappointed by claims that his eagerly awaited new possession cannot reach half the expected speed – and is now considering launching a major legal battle against the British dockyard that built it.

Scroll down for more…

Off the pace: The Alamshar during tests off Plymouth

‘Not happy’: The Aga Khan

The 70-year-old, who leads the world’s 20million Ismaili Muslims, ordered the vessel to be built specifically to take the record.

But sources say the Alamshar, named after a racehorse he owns, attained only 30 knots during sea trials off Plymouth – so the Aga Khan has hired a firm of top international maritime lawyers to handle any potential claim against boatbuilders Babcock Marine, who own Devonport naval dockyard where the Alamshar was built.

Although no High Court writ has been issued, the disagreement could lead to a multi-million-pound payout.

The row is the latest setback to have hit the Alamshar.

Last year, during an earlier test, the turbine blades in its three Rolls-Royce gaspowered engines – which were originally designed for Sea King helicopters – burnt out.

They were replaced with engines made by Rolls’s US rivals Pratt & Whitney, which were used to drive water jets.

At full power the Alamshar was hoping to break the world speed record for super-yachts, currently 65 knots, as well as beat the transatlantic record of two days, ten hours and 34 minutes – an average speed of 53.1 knots – set in 1992.

The Alamshar, codenamed Project 305, is made of aluminium and at 400 tons is a fraction of the weight of other yachts of its class.

It has been built under a veil of secrecy but luxury will not have been sacrificed in any of the three bedrooms or the stateroom.

Scroll down for more…